DRAGONS IN THE FIELD: captive words 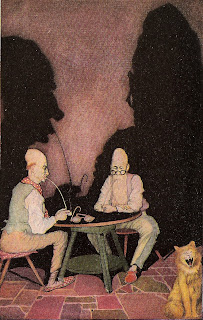 CLICK ON THE IMAGE
DOWNLOAD ~8.9MB MP3
LISTEN IN ITUNES OR QUICKTIME PLAYER
IF IT DOESN't WORK, SEE "CAVEAT EMPTOR" BELOW

hello out there in webland.

i'm very happy to present you with the first installment of my techno-soap opera, provisionally titled dragons in the field, although i expect the title to morph over time. the first episode is called "captive words," after a text by mustapha khayati. you can find the text online in a poor translation from the french at http://www.cddc.vt.edu/sionline/si/captive.html. the piece i present is not really based directly on the khayati piece. but my entire creative output owes more than a lot to the writings of the group that did its anti-business as the situationist international back when i was so young that i was still afraid to kiss a girl on the lips [apologies to lisa scott and joyce marshall, wherever you are]. here's a tidbit from the contents page of the first issue of their magazine, published in 1958, the year before i was born [in walter reed army hospital on september 11, at around the same time all that collapsing happened 41 years later]:

Talent wanted for getting out of this and playing
No special qualifications
Whether you're beautiful or you're bright
History could be on your side
WITH THE SITUATIONISTS
No telephone. Write or turn up:
32, rue de la Montagne-Geneviève, Paris 5e.


years later, when i lived in paris, i worked at a bar directly across the street from that address. but the s.i. was no more. just a bunch of drunk american girls at the only happy hour in paris, stumbling on the cobblestones, fighting off the french boys looking for an easy lay, imagining that i was nice enough to help just because i got everyone drunk.

i discovered the situationist ouevre thanks to the advanced erudition of my ex-wife and eternal partner, vibeke jensen. these texts literally inspired a whole new way of thinking, a whole new way of seeing, a whole new way of life, the only thing worth living for. i met carlo altomare ten years before i met vibeke, and we have wanted to collaborate on creative projects from day one. instead, we cooperated on some pretty destructive projects, which we later explored on our own, but it was where we directed our attention, so it was good. and we are alive. and, uh, sane... saner? i navigate ny way through all those big ugly trailer trolls living around here, up in the hills with their beards and guns and snowmobiles and V8 american trucks. but i know a lot of fairies and elves and wee folk, and they teach me the lore of the land, the language of the growth of the soil, and i am translating it back into stories for you lumbering humans to relate to as best you might.

the image you see here is from an early edition of the crock of gold by james stephens, a giant of 20th century irish literature and a very dear pal of james joyce. both of them are dead. whenever i find a copy of it, i buy it, then i give it to someone i love. it's full of cops and leprechauns and angus mac og and the great god pan and nymphs and maidens and philosophers and the wives of the philosophers and their lost kids.. keeping it on the fairy tip, the next episode of dragons in the fields derives from a text entitled "An Historical Overview of the Whereabouts of Gnomes and Elves, Fauns and Faeries, Goblins, Ogres, Trolls and Bogies, Nymphs, Sprites and Dryads, Past and Present" by Buck Young. I dare you to read it out loud to someone you love. especially if you're a good reader.

this piece, "captive words" or episode one from dragons in the field, is kind of an homage to joe frank. as is a lot of what i have forthcoming. joe frank rocks. go to http://www.joefrank.com/, and give him your money if you have any to give. otherwise, you can settle for the few free things he's got, or find out when his shows air in your neck of this godforsaken country on the eve of a long overdue cantonization.

well, maybe you should just listen. explaining is for the birds. or at least, "special features," but this is no dvd.

CAVEAT EMPTOR
apparently, all things being equal, this podcast does not appear for all. i don't understand. you simply click on the title "captive words" or the image of the philosophers and their shadows, and then your browser will redirect to the site ADrive, which will give you the message:

there's more, but that's the most relevant stuff. oh, and, also, i noticed that the file appears in my safari downloads window as motscaptifs.mp3 and that it is 8.9 MB; in itunes, it appears simply as "dgf" in the "Names" column. that's probably because i named the garageband file "dgf" as in donald & gary final, but then named it as "motscaptifs.mp3" under "Share: Export Podcast to Disk..."

if you're using mozilla firefox, there may be a security error. go to "TOOLS/Error Console" and scroll to the bottom and you can read it. I don't know the fix, except to advise you to use safari. if there is a problem in firefox, there may be a problem in explorer and netscape, too. i don't feel like checking them all, as i only have a macbookpro, and i don't have the ability to check out all the other permutations and configurations of all the computers out there. i suppose the best thing to do is to troubleshoot. try other browsers, close other applications. try, try again. i mean, it's a computer. things don't always work. i'm not aware of how your machine is set up. i wish i could go thru every possible set-up, but i cannot. good luck to both of you.

Popular posts from this blog

In the Company of Ghosts: interview with Dennis Dawson & Paul Paddock

In the Company of Ghosts features artists Dennis Dawson and Paul Paddock and runs through February 23, 2014 at Frosch & Portmann at 53 Stanton Street in the Lower East Side. Paddock, a graduate of SVA and a tyro of Fine Arts professor Lynton Wells, garnered positive press from BlouinArtInfo when showing at the gallery's Pulse booth in 2012 for his "technically refined, subtly disturbing, and playful watercolors." Active since graduating in 1997, his work continues to reference the kind of dark childhood memories that many of us would soon forget. Employing iconic figures of children that invoke the illustration style common to early primers, he subverts the typical moral celebration of suburban white America. Never far from the barren woods of winter, Paddock's kids, clad in shorts, t-shirts, and summer frocks, reap the bitter, painful fruits of their wanton curiosity. Working in series with titles that name villains and locales popularized in fairy tales, mythol…
Read more

Reflections on Kara Walker's "A Subtlety"

According to a graphic created by the Idealist for its Facebook page, the planet—and the humans who ordained themselves its stewards—has not seen a day without war in over 5,000 years. Besides death and destruction, one of the more unsettling outgrowths of war is the peculiar institution of slavery, a blight that is whispered to have endured unto the present day. This development makes a certain amount of sense, however disagreeable. Since battles rarely end with the total annihilation of one force by another, the losers are taken captive and, thereafter conveyed to the homeland of the victors. In our modern, sophisticated minds, prisoners are held in prisons, penitentiaries, detention camps. A booming industry devoted to incarceration may outstrip manufacturing in the USA in the not too distant future. But in the old days of antiquity, classical times and all that, it made more sense to put one's captives to work without pay than it did to just lock them away. Voila! Slavery was …
Read more